This year was the first time I got the chance to go attend WWDC in person as opposed to watching the videos like all the other years … and it was awesome!

A bit late, but wanted to share some of my thoughts on my WWDC experience as it unfolded day to day. I’m afraid I won’t be able to share much of the technical details as I would be breaking the NDA every developer signs.

Flying in from London, I planned to get there for the Saturday evening so I get a day to settle in and adjust to the new timezone in preparation for Sunday morning’s registration session. I had two main goals for the day, the first was locating the Moscone Center so I know the best route to get there, and the second arguable more important one was getting a sim card with a data plan (data roaming charges are not pleasant!).

The rest of the day was spent wondering about exploring the areas surrounding the hotel and trying to stay awake to a decent time to get my body clock in sync with the local timezone. 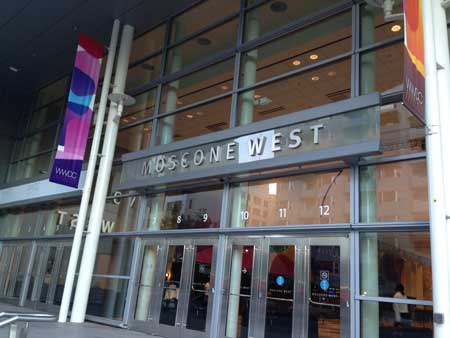 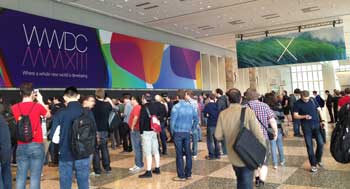 I was travelling with a few colleagues, so we met up in the morning for the registration to get our WWDC badges and jackets.

Afterwards it was time to tour San Francisco! One of my colleagues rented a car which made the touring much more convienient as it meant we were able to get to places public transport wouldn’t have easily got us to such as the Golden Gate bridge or the Twin peaks (when it’s foggy that place looks like a typical scene out of a horror film).

To be honest, I found the Bay Bridge to be much more impressive!

Having a car did mean we were able to go to the Apple Campus (One Infinite Loop) in Cupertino to buy some souvenirs and goodies from the Campus Store. We even had some time to drop by the Facebook office and the the Google campus on the way back. 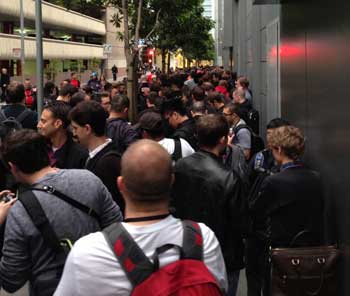 After numerous discussions the previous day, we all agreed to queue at 5:30 AM, not crazy early, but not too late either.

And so Monday began bright and early. It was the first time I got acquainted with the queuing culture on such a large scale. Time flew by much quicker than I thought it would. There was a surprising number of free giveaways handed out to everyone queuing which included drinks and snacks (I found the coffee to be the most valuable giveaway).

They started letting people into the centre at around 7, where we queued over and over again a few times before we finally made into Persidio - the main hall where the keynote was taking place. It was such an amazing experience being part of the crowd in the hall watching the keynote and witnessing the announcements first hand as they unfolded.

The rest of the week

The rest of the week was spent attending as many sessions as I could and queuing to get into these sessions (I don’t believe I’ve ever queued as much before in my life).

In addition to the technical sessions, there were lunchtime sessions where guest speakers from industry were invited to talk about their professions and what motivated them to get to where they are now. Some of these sessions were really interesting and the food provided in the lunch boxes was surprisingly good too.

Evenings were kept occupied with a number of parties and social events (This page had a list of the events). These ranged from quizzes, networking sessions, lectures, to full blown parties and concerts. Two highlights would be Wednesday night’s Crittercism party which was awesome! and Thursday’s Bash event that was arranged by Apple which had Vampire Weekend playing live on stage in Yerba Buena Gardens!

For anyone reading this who plans on going next year, here are some tips:

I found the T-Mobile $3 a day deal ideal for this trip as it didn’t require a contract and it provided unlimited texts, minutes and data (the first 200MB on 4G/3G speeds and the rest were on 2G - but even with my heavy usage it was plenty and I never exceeded the higher speed allowances).

During the keynote - just switch your data off, there is just way too many people in one spot, you won’t get a data connection (via your provider or the WiFi), and you’ll battery will drain away in record time.

Speaking of battery, invest in a battery extender - they are a life saver especially if you rely on your mobile to navigate around and it’s your first time in San Francisco.

If you plan on touring, rent a car! To get to some of the popular destinations, public transport is a bit tricky (I haven’t personally tried, but it didn’t seem like there were any buses or trains going there).

Go to the sessions you want to attend, don’t worry about the ones you miss because you can watch them online. These videos were being posted online much quicker than they have done in the past.

If you’ve got a MacBook Air, Invest in a Thunderbolt or USB ethernet adapter. Once the new iOS and Mac OS previews get announced, you can get them zapped down onto your Mac in no time via the ethernet cables available at the desks on the lower ground floor (near the labs). Don’t bother trying to download it over WiFi - it just won’t work.

The sessions at WWDC were very educational, It felt like I was back at university for a week long course on all things Apple! I met a lot of interesting people some of whom worked on some of my favourite apps!

San Francisco is such a nice city and has just the right weather that time of year, sunny and warm (not hot) with a cold breeze. I would highly recommend a visit up Coit tower to get the best panoramic view of the city.